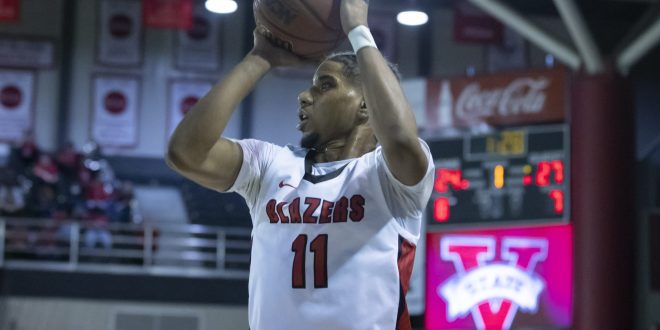 The VSU men’s basketball team had to win their final home stand of the season to potentially make a push for the GSC tournament.

Unfortunately for the Blazers (11-14, 7-11 GSC), they dropped both of their contests, falling to Lee 67-58 and losing a shocker to Shorter 74-70. The losses pushed an already season-long losing streak to five games.

In both losses, the Blazers struggled to maintain consistency on offense. The Blazers shot under 40% overall and a woeful 26% from three-point range over the two-game stretch.

“It’s kind of a summary of our year,” head coach Mike Helfer said. “We just struggled so bad offensively that we can’t put an offensive run together that typically we’ve done for 16 years here to pull away from teams or to close out games at the end. We just don’t have the offensive firepower to do that.”

Against Lee, VSU got off to a strong start offensively to take an early lead over the Flames. While the Blazers weren’t able to put some distance between them and the Flames, they were able to control the pace for the first 12 minutes of the game.

That’s when things quickly went south for the Blazers. Lee turned a 21-19 deficit into a 34-23 lead and took a 34-27 advantage into halftime.

During the Flames’ 15-2 run, the Blazers shot 1-9 from the floor and committed four turnovers.

Despite VSU’s best efforts, the Flames would not relinquish the lead in the second half. The Blazers would not get closer than five points over the final 20 minutes.

Having won each of their previous 13 meetings against Shorter, the Blazers were looking for much of the same against the Hawks. The Hawks, however, had different ideas in mind.

The game was defined by a series of runs. Both teams had two major scoring runs in the first half, but it was the Blazers who went into halftime with a 34-29 lead.

VSU seemingly began to pull away from Shorter in the beginning of the second half, building a 40-33 lead over the Hawks. However, the Hawks went on a 13-3 run to take a 46-43 advantage.

The game became a back-and-forth brawl as neither team could gain much separation. For much of the final ten minutes, the game was either tied or a one-possession game.

That’s when the Hawks broke through and put some distance between them and the Blazers. The Hawks took a 61-56 lead with three minutes left in the game.

While VSU would knot things back up at 65 apiece, the Hawks were once again able to pull away and take a 72-67 lead. Shorter closed out the game at the free throw line to secure the upset win over the Blazers.

As it has been in other games this season, the free throw line was the difference in the game. The Hawks went 16-19 from the line, while the Blazers went just 11-19.

“We’re not a good free throw shooting team,” Helfer said. “I think everybody knows that, when we go to the free throw line up is hoping that we make one and you’d like to make two, especially down the stretch. You got to make free throws, and we haven’t all year. We’ve just struggled with it so bad.”

With two games left on the schedule, VSU needs a miracle to make the GSC tournament. The Blazers not only need to win both of their games but also need current eighth-place team Delta State to drop both of their remaining games.

While there is a slim chance that the Blazers do make the tournament, Helfer isn’t counting on everything to fall into place.

“I don’t think we can catch anybody, which you know, that relieves pressure on our shooters,” Helfer said. “We got two games left on the road. We might shoot the heck out on the ball because there’s no pressure on us at all. So we’ll see what happens.”

The Blazers wrap up their regular season on the road, first facing Alabama Huntsville on Feb. 22 at 5 p.m. and then traveling to play West Georgia on Feb. 26 at 2 p.m.

Previous Column: How to be a good roommate
Next Self-Love at VSU