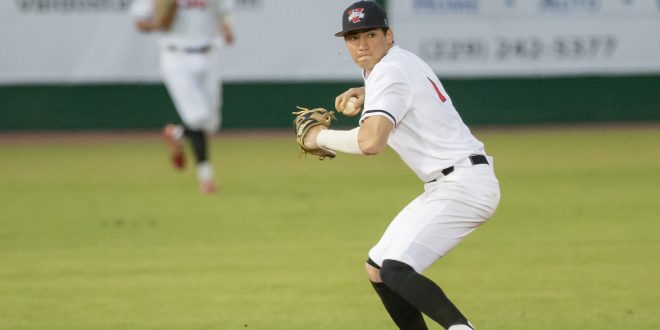 The VSU baseball team escaped unscathed from their trip to Tennessee play the Lee Flames this weekend, sweeping the series 2-0.

With the wins the Blazers improve to 9-4 on the season and 4-1 in conference play, half a game out of second place.

The Blazers’ pair of wins came by a combined total of only two runs. Elijah Gill won game one 8-7, and JJ Finn notched his third win of the season with a 4-3 victory in game two.

Gill allowed 10 hits in five innings, but seven of them came across only two of the innings. The first runs of the game came in the fourth, where Gill allowed three on-base and two to score.

Asides from that and the three straight singles Gill gave up to start the sixth, he allowed only three on base.

The bullpen got the Blazers out of the jam in the sixth inning, only allowing one run to cross. That one run proved crucial as the Blazers had to hold on to it for the 8-7 win.

It took a while for the Blazers to get going offensively, but once an error and a walk gave them some life in the fifth inning it was like the floodgates opened.

The Blazers scored seven runs in the next three innings to take the lead and win the game.

Senior left-fielder Luke Ard reached four times for the Blazers, and scored a pair of RBIs. Jose Crisostomo Bock also added a pair of RBIs, and Doskow and Adams added one apiece with their walks.

The bats got going early again for the Blazers in game two as they hung four runs on Flames’ starter Jack Nedrow in the first two innings.

And the Blazers would ride those four runs to the victory and series sweep as Lee couldn’t catch up in the seven-inning game 2.

Finn held the Flames scoreless until the fifth inning where the sophomore right-hander allowed a pair of walks and a single to load the bases.

A run scored that inning, and the Flames scored two more in the sixth, but the Blazers’ relievers did their job and extinguished the Flames, with graduate student Adrian Garrastazu earning a save for throwing the final two innings allowing only one hit.

It’s a good thing the Blazers were able to close out game two with pitching because after the hot start they didn’t record another hit.

But the four hits they did record in the first two innings were enough on Saturday. Ard, David Crawford and JJ Clotida recorded the only RBIs for the Blazers.

Game three on Sunday was cancelled due to weather. The Blazers play next at Flagler this Wednesday, March 2 at 5 p.m. This weekend they play at home against Montevallo in the third GSC series of the season.