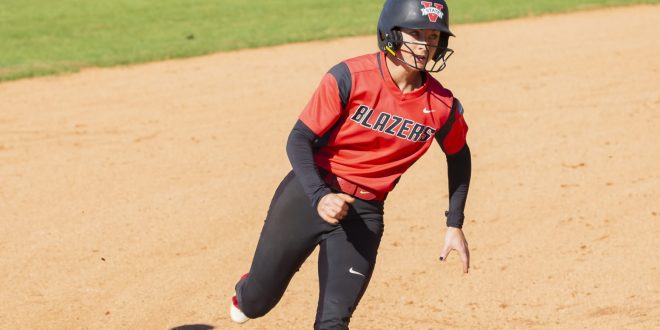 VSU softball wins 3 of 4 to close out road trip

The two series came on the heels of a doubleheader against Georgia Southwestern on Feb. 23. The Lady Blazers split the series with the Lady Hurricanes.

The Lady Blazers’ series against Lee was initially slated to be a three-game series. However, their third game against the Lady Flames was cancelled due to inclement weather.

Still, the Lady Blazers swept the series, winning both games in high-scoring affairs as part of a doubleheader on Feb. 26.

Junior infielder, Taylor Lewis got the scoring started for VSU with a home run in the second inning. The Lady Blazers tacked on four more runs during the third inning to build a 5-0 lead.

Lee’s Taylor De Adder helped cut into the lead with a two-run homer during the bottom of the fifth inning.

After a scoreless sixth inning, the game finished with a scoring flurry. VSU and Lee combined for nine runs during the seventh inning.

While the Lady Flames did score four runs during the bottom half of the inning, it was not enough to overcome the early deficit. Sophomore infielder Katie Proctor’s two-run home run helped give the Lady Blazers enough cushion to escape with a win.

The second half of the doubleheader was even more high-scoring than the first as the hot-hitting continued for both teams. VSU and Lee combined for 23 hits during the seven inning stretch.

Lee jumped out to an early 6-2 lead in the first inning as the Lady Flames were able to load the bases to set up a string of runs. The Lady Blazers clawed their way back out of the early hole to tie things up in the third inning thanks to home runs from Lewis and graduate student infielder Ally Clegg.

Lee wasn’t ready to relinquish the lead quite yet, as Lee scored five more runs in the bottom of the third inning to take an 11-6 lead.

The move paid off. Richards struck out four batters and gave up just one hit over the final four innings.

Offensively, the Lady Blazers pulled back ahead by scoring eight total runs during the fifth and seventh innings for a wild 14-11 comeback win. Senior infielder Nikki Pennington’s three-run blast during the seventh inning helped put VSU ahead for good.

The Lady Blazers’ strong hitting from the weekend continued into their midweek series against Flagler on March 2.

In the first game of their doubleheader against the Lady Saints, the Lady Blazers cruised to a 9-0 win.

Clegg’s three-run dinger during the second inning highlighted another strong offensive performance for VSU. The home run put the Lady Blazers up 4-0 at that point.

From there, it was all cruise control against the Lady Saints as VSU kept tacking on runs to build up an insurmountable lead.

Defensively, Richards had another stellar game. Over six innings, Richards struck out eight batters and gave up just one hit.

The Lady Blazers’ offense hit a speed bump during their second game against Flagler, falling 4-2.

The Lady Saints took an early 1-0 lead following an error by the VSU defense that allowed Paige Maseda to reach home plate.

VSU answered in the top of the second inning with a run by Lewis, who scored off a hit by junior outfielder Hunter Meadows. Flagler answered back in the bottom half of the inning, with Maseda bringing in two more runs via a double to give the Lady Saints a 3-1 lead.

A home run by Clegg in the top of the third inning allowed the Lady Blazers to draw within one.

However, it would not be enough to spark a comeback. A home run by Flagler’s Alyssa Velez in the bottom of the fifth inning was all the Lady Saints needed to pull off the upset win.

The Lady Blazers will be back at home on March 5-6 for a three-game series against Montevallo.

Previous Editorial: Is College Education Worth the Financial Burden?
Next Amazon hit show ‘The Legend of Vox Machina’ confirmed for season two