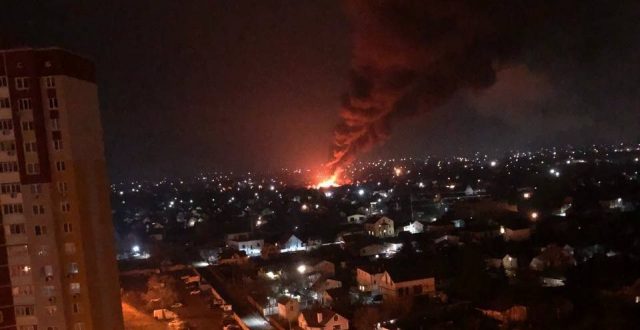 Ukraine and Russia: An Ongoing Crisis

On Feb. 24, Russia has officially invaded Ukraine, causing a major crisis in Ukraine.

A week later, many citizens are still trying to escape from the attacks, leaving with only what they can carry and a hope that they can get out safely.

However, there are many events leading up to Russia’s invasion.

Ukraine has a rich and complex history, In December 1991, Ukraine became an independent country, shortly after the fall of the Soviet Union. The independence came from a vote by the people of Ukraine.

In 1994, The Budapest Memorandum was signed for the security and safety of Ukraine. This was signed after Ukraine moved its nuclear weapons to the Russian Federation. After this, Ukraine was left with no nuclear power. The document was signed by the United States, United Kingdom and Russia, guaranteeing Ukraine’s sovereignty and rights to its territory.

In 2004, a presidential election took place between Viktor Yushchenko and Viktor Yanukovych. While Yanukovych originally was reported to win the election, the election was considered to be rigged. This caused many protests to break out to what is now referred to “The Orange Revolution.” During all of this, Yanukovych was poisoned with Dioxin, which is believed to be the work of the Kremlin. A run-off election was held, which resulted in Yushchenko winning.

In April 2008, the NATO Summit had begun, to which an offer was made that allows Ukraine to join NATO. This was called a Membership Action Plan (MAP) that was held between 28 countries in Europe, Canada and the United States. Because of Putin voicing his opposition to Ukraine, a MAP was never held, resulting in Ukraine not joining NATO.

From February to March 2014, Russia invaded and seized Crimea. The United Nations and the European Union condemned Putin’s actions. Protests were held internationally in outrage of the event. There became an ongoing war between the Ukrainian people and Russian Separatists in Donbas.

Volodymyr Zelenskyy was elected President of Ukraine in 2019. He defeated his opponent, Petro Poroshenko. After winning, Zelenskyy vowed to end the ongoing Russian war and rid the Ukrainian government of corruption.

In December 2021, Putin deployed thousands of troops to the border of Ukraine. As well as asking NATO to never allow Ukraine to join, which was rejected. Russia claimed that these soldiers were not there with ill intentions, but just practicing military exercises.

While this is ongoing, the latest update is that Russia has seized a nuclear power plant after a military attack by Russia caused the plant to catch fire.

According to Dr. Shelly Yankovskyy, a VSU professor and cultural anthropologist specializing in medical anthropology, she has conducted research in Ukraine on the political-economic dimensions of the mental health system in the post-socialist country.

Her research in Ukraine began with an interest in intergenerational trauma and mental health.

Her research began to shift to human rights issues and mental health after working with a local NGO called Human Rights for Psychiatric Patients. The main focus of the NGO was to be an advocate for the patients whose lives had been shaped due to the history of Ukraine. During this time, she lived in Ukraine for two years, including time in Kyiv.

“As someone who has family inside . . . is the U.S doing what they should, I don’t know,” she said. “I think we’re doing a good job of providing support. But it is kind of like we’ve come to the door stop, and we’re not going inside.”

Some students have families in Russia and Ukraine who may be nervous about the events that are taking place.