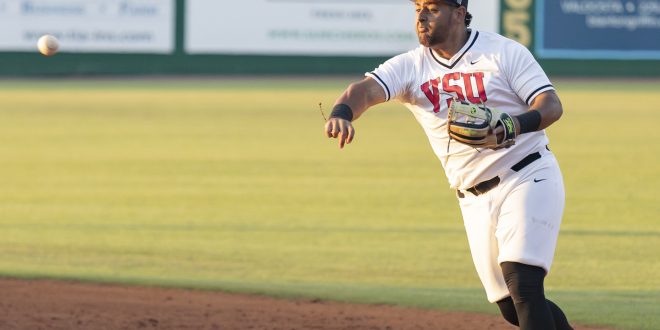 VSU baseball takes 2 of 3 against Choctaws

The No. 19 VSU baseball team rode its wave of momentum into Clinton, Mississippi, over the weekend.

While they secured the series win, they lost the second game of the series, snapping their six-game winning streak.

In a high-octane weekend full of runs, both VSU and Mississippi College crossed home plate seemingly at will.

On Saturday afternoon, despite a 5-1 deficit in the first inning, the Blazers pulled out an 11-6 victory.

The Blazers knocked 19 total hits in the game, led by junior Ryan Romano’s 4-5 showing and home runs from both junior Bryson Gandy and senior Jisjar Clotida. So, dominant was the Blazers’ offense, no position player went hitless.

Mississippi College quickly loaded the bases in the first inning, as a fielder’s choice, an error, and a hit by pitch put senior pitcher Elijah Gill in an early jam. An RBI single by Markarius Lee and a grand slam by Lance Wade created that 5-1 deficit.

Gill settled down after that rocky start and went on to toss seven innings, punching out 11 and allowing only one other runner to cross the plate. Despite the six runs on the scoreboard, only one of them was considered earned, leaving Gill with very little liability for the situation.

Saturday evening ended up being the end of the win streak, as VSU fell in the seven-inning leg of the doubleheader, 9-5.

Both teams struck quick in the game, as the first inning ended with a 3-3 tie. And despite the Blazers taking a 5-3 lead in the third inning, the Choctaws scored four in the fifth and two in the sixth to wrap the bow on top of the game.

The Choctaws’ Ken Scott won the game nearly singlehandedly, as he went 3-4 and drove in seven runs, nearly hitting for the cycle in RBI hits alone. He wasn’t alone, as the top four hitters in the Choctaws’ lineup went 10-16 and scored all nine of the teams’ runs.

On the Blazers’ side, sophomore pitcher JJ Finn had a rough start, giving up seven runs in his four innings of work. On the offensive end, junior EJ Doskow hit his sixth home run of the season, a solo shot in the third inning.

In the rubber match of the weekend series, the Blazers used three pitchers in a slight bullpen game variation to hold the Choctaws to three runs, as the Blazers won the series 8-3.

The Blazers and Choctaws traded one-run innings up to the fifth inning, which ended with a 3-2 Blazers lead.

However, the game was broken wide open in the top of the sixth, as VSU put four runs on the board behind some solid hitting, a timely error and a three-run home run by sophomore Jacob Harper.

The Blazers also got four-baggers from Gandy and graduate Mike Christopoulos, as well as two doubles from EJ Doskow. Ryan Romano chipped in two singles himself, providing a constant on-base presence for the Choctaws to deal with.

The Blazers are now 19-6 on the season and 11-3 in conference play, putting them half a game behind West Florida for the lead in the Gulf South Conference.

The Blazers will be in action again on Wednesday as they face Flagler at Billy Grant Field. After that, Christian Brothers will come to town for a weekend series.

Previous Gas Prices Are Rising: Blame it on the Pandemic
Next Dixie Cream Donut Shop is a fan favorite in Valdosta