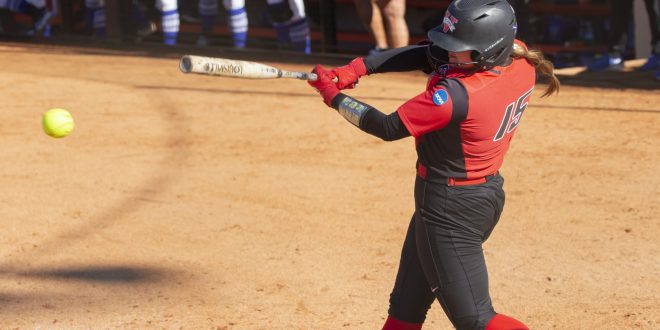 The VSU softball team got back to their usual ways following a setback in Clinton, Mississippi, last weekend, sweeping Christian Brothers from the friendly confines of the VSU Softball Complex.

The sweep was their fifth of the season. The series sweep also keeps the Lady Blazers (24-5, 16-1 GSC) two games ahead of Auburn Montgomery for the conference lead.

Following a shift in game times due to inclement weather, Saturday featured a late afternoon doubleheader. While doubleheader games typically have seven innings, the Lady Blazers only needed five for game one as they run-ruled the Lady Buccaneers.

Junior pitcher, Samantha Richards put together a strong performance in game one, giving up just one hit and striking out eight batters to keep the Lady Bucs’ offense shut down.

The scoring continued in the second inning, albeit just one run. Sophomore first basewoman, Aniston Gano continued her strong season, recording yet another home run to put VSU up 6-0.

Clegg capped the scoring in the third inning with a two-run homer, bringing in Hill and creating what would be an insurmountable deficit.

The second half of Saturday’s doubleheader was tighter than the first as the Lady Bucs’ bats came to life. However, the Lady Blazers’ offense stayed on a roll, racking up 14 hits for the game.

The game got off to a slow start with neither team scoring for the first two innings. VSU busted through with a pair of runs in the third inning.

Senior shortstop, Nikki Pennington recorded her seventh home run of the season, bringing in Gano to give the Lady Blazers a 2-0 advantage.

The Lady Bucs came roaring back in the fifth inning, scoring four runs to take a 4-2 lead.

VSU came right back in the bottom half of the inning with a five-run burst.

Gano smacked a home run to cut into the deficit. Macera gave VSU the lead with a double to left field, bringing home freshman pinch runnerBobbi Poff and Pennington.

Christian Brothers still didn’t back down, adding two more runs in the top of the sixth. However, it would not be enough.

The Lady Blazers went back up by four runs in the bottom of the sixth. Junior catcher Taylor Lewis sent one flying over the wall for the Lady Blazers’ third home run of the game. Macera scored the final run of the game, reaching home following an error by Christian Brothers’ second basewoman Josie Bond.

Sunday’s game saw VSU having to dig themselves out of a steep early hole.

Hill’s time as pitcher was quickly cut short as she committed six errors and gave up six runs in the top of the first inning.

The Lady Blazers began clawing their way back in the fourth inning with a two-run home run from Gano. Their comeback continued in the fifth inning, with Pennington’s single to right center field bringing in both Hill and Everson.

VSU was able to tie things up in the sixth as both Everson and Meadows scored.

The Lady Blazers walked it off in the bottom of the seventh. With bases loaded, Hill sent one over right field for a walk-off grand slam.

Previous Editorial: Will Smith Oscars controversy blown out of proportion
Next Poll Response: Spring break allowed for a lot of needed ZZZs