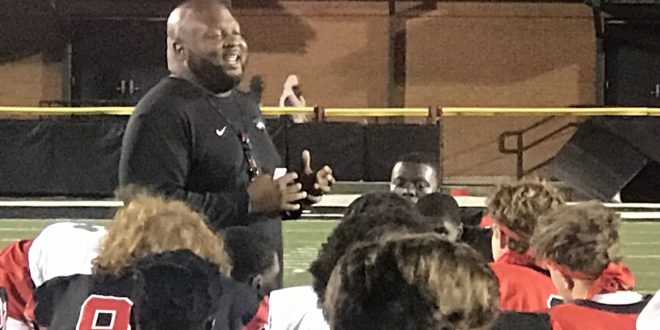 The VSU football team held their annual spring game on April 8 with the Red Team and Black Team playing to a 24-24 tie.

The spring game served as a culmination of spring practice while also allowing fans to get a preview of what the Blazers will look like next fall under new head coach, Tremaine Jackson.

The Blazers are coming off a 12-2 season that saw them win their third straight Gulf South Conference championship. They finished as runner-ups in the national championship, losing to Ferris State in McKinney, Texas.

The spring game format featured two teams selected by a draft with junior quarterback, Ivory Durham and junior linebacker, Jameon Gaskin being the team captains. The draft was held on April 4, and both teams were fired up heading into the spring game, according to Jackson.

“These guys have been geeked up and fired up on social media been talking to each other all week,” Jackson said. “We couldn’t even get our regular practices done really, because of the energy level that they had. What we often talk about is how we can out enthuse people, and even when we’re wrong, our energy still makes us right.”

Additionally, the spring game had built-in game scenarios that helped simulate what a real game would be like.

“I was really excited about the different situations we were able to get just by putting this scrimmage on in the format that we had,” he said. “We got the ebbs and flows of a game. We got a comeback. We got plus-40 work minus-25 work. Field goals were incorporated. We had a guy drop a punt which we simulated at that point would have been blocked.”

Following both teams trading punts to open the game, the Black Team put together a ten-play drive that culminated with the first points of the game. Freshman quarterback, Sam Edwards, capped off the drive with a four-yard pass to freshman wide receiver, Council Allen, for the touchdown.

The Black Team continued to build momentum as freshman defensive back, Travis Cooper, sacked Durham to stall out the Red Team’s ensuing drive.

Edwards then led another successful drive, this time punching it in himself with a ten-yard run to give the Black Team a 14-0 lead.

The two scoring drives helped build not just the Black Team’s confidence, but also Edward’s confidence as a quarterback.

“Our guys on the sidelines did a good job giving us energy,” Edwards said. “As a young quarterback, I think confidence is the most important thing.”

Late in the first half, the Red Team was finally able to put points on the board. Durham led a drive all the way down to the Black Team’s 13-yard line, setting up freshman kicker, Robert Jacobs, 31-yard field goal attempt to make it 14-3 heading into halftime.

The Red Team built on their late first-half momentum and turned it into another scoring drive. Durham’s four-yard pass to redshirt junior running back, Jamar Thompkins, finished the drive off as the Red Team made it a four point game.

The Black Team answered back, however. Redshirt freshman, Tanjuatco Gelin, did a bulk of the work on the drive, rushing for 19 yards and scoring from ten yards out to put the Black Team up 21-10.

After stopping the Red Team on fourth down, Edwards helped put the Black Team in scoring position with a 64-yard pass to freshman wide receiver, Keonvay Clark. However, the Black Team did have to settle for a 24-yard field goal from redshirt sophomore kicker, John Miller.

The Red Team was able to mount a comeback behind the arm of Durham, who completed a pair of touchdown passes to redshirt freshman running back, Isaiah Flowers, including a 35-yard strike to tie the game. Flowers led the Red Team with five receptions for 72 yards.

When it came down to it, it was Durham and his legs that helped tie the game as he was able to extend plays and complete big passes to tie the game.

“The game plan was to keep me in the pocket,” Durham said. “Gaskins was supposed to spot me, so I was pretty much just trying to stay focused on throwing the ball. Again, second came down and it was time to take over so I can do what I need to do to tie this game.”

With a chance to win the game, the Black Team drove the ball down to the Red Team’s 16-yard line. With the game on the line, Miller was sent out to kick what would have been a 33-yard game-winning field goal.

That’s when everyone from both teams ran on the field to ice the kicker to further simulate a real-game scenario of crowd noise. The tactic worked as Miller’s sailed wide left.

Among the biggest improvements that Jackson noted was the team’s tackling, which was a fatal flaw in the Blazers’ loss to Ferris State in the national championship.

“It looked like we tackled better tonight than we did scrimmage one, when we were out here,” Jackson said. “The essence of defense is tackling, and they understand that now. And so we had guys this week spiel a block in practice for the first time all spring. It took 13 practices because in their minds, they’ve been used to doing it a certain way. Normally, it takes 30 days to break a habit. We broke it in 13 and 14.”

Despite it being a spring game, Blazer Nation showed out in force for the game, which some players noticed during the game.

“It’s exciting,” junior running back Seth McGill said. “During the season, it’s good to have fans on your side and the crowd to be into it. It played a big part of our play as well.”