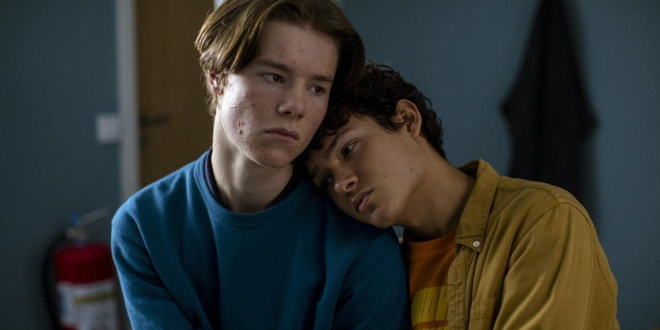 In the wake of Netflix releasing the trailer for their upcoming show “Heartstopper,” fans of another popular show are awaiting an announcement of their own.

On Feb. 25, Netflix Nordic, one of the streaming service’s international affiliations, announced on social media that production had begun for the second season of “Young Royals.” The show tells the story of Prince Wilhelm of Sweden (Edvin Ryding) as he navigates his life and status in a prestigious boarding school.

Directed by Rojda Sekersöz and Erika Calmeyer, the first season of the Swedish Netflix original was released on July 1, 2021. According to Netflix statistics, it racked up over nine million viewing hours and spent one week on the top ten list after just ten days.

Critics and fans applauded the show for its accurate portrayal of teenagers, ADHD, relationships and sexuality. The show’s primary praise, however, was towards its use of textured skin.

Claire Di Maio, an author for the entertainment website The Young Folks, wrote in her review of the show, “What makes ‘Young Royals’ particularly impressive is its casting of actual teenagers—the characters may be monarchs and socialites, but they have the faces of real people, pimply and young and flawed, creating a believable world of young royals, indeed.”

Along with its original Swedish lines, dubbed and subtitle translations are available. The actors recorded their own English lines for that version, and the subtitles match what is being said the majority of the time.

If you’re a fan of the show, here’s what you need to know for the upcoming second season. Warning, there are major spoilers ahead.

Prince Wilhelm is sent to Hillerska, a fictional boarding school, following the spread of a viral video showing him fighting another student at his public school. His cousin, August (Malte Gårdinger), promises Wilhelm’s older brother, Erik (Ivar Forsling), that he will take the youngest prince under his wing, making sure he is comfortable and stays out of trouble while attending Hillerska.

Wilhelm meets Simon (Omar Rudberg), a student who attends the school on scholarship. After forming a friendship, the two kiss, eventually forming a secret relationship. After Erik dies in a car accident, Wilhelm is named Crowned Prince, meaning he will take the throne after his mother.

Following the tragedy of his brother’s death, Wilhelm and August argue and Wilhelm tells a group of their peers that August is broke and couldn’t afford to pay his tuition. In retaliation, August leaks the sex tape he secretly took of Wilhelm and Simon earlier in the season.

Wilhelm tells the press he is not the person in the video, causing him and Simon to argue. After telling Wilhelm he won’t be anyone’s secret, Simon ends their relationship.

When will season two drop?

The second season will pick up where the first ended, and all primary cast members are set to return. Appearances from season one’s recurring characters will also continue.

Many fans are assuming the second season will contain only six episodes like the first one, but this number has not been confirmed by Netflix or any “Young Royals” producers, actors or writers.

Netflix announced the second season confirmation on Sept. 22, 2021. While no date is currently scheduled for its release, fans and critics alike are presuming it will be out sometime this year due to its small amount of post-production editing.