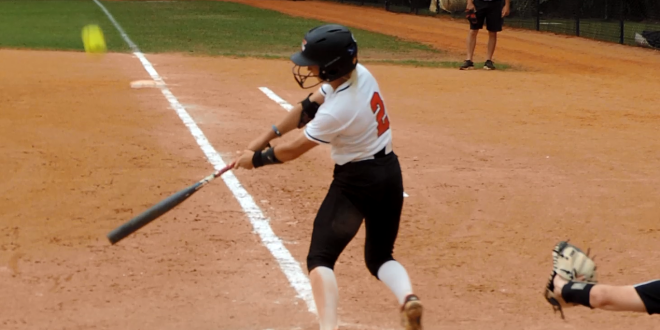 Despite the losses, however, VSU still holds a half-game lead over the Lady Warhawks in the Gulf South Conference. Both teams, along with West Florida, have already clinched berths in the GSC Tournament.

The first half of Friday night’s doubleheader kicked off in style for the Lady Blazers, with their first three runs coming from home runs.

The Lady Blazers continued to add to their lead in the fifth inning as both sophomore pinch runner, Kayla Tosone, and sophomore second basewoman, Taylor Macera, scored. Macera’s single up the middle brought in Tosone, while Macera was able to reach home on a wild pitch.

Throughout the first four innings of the game, junior pitcher, Samantha Richards held the Lady Warhawks in check, striking out eight batters.

However, as the game went on, Auburn Montgomery was able to claw their way back into the game.

In the fifth inning alone, the Lady Warhawks scored three runs. They’d score two more runs in the sixth and seventh innings to tie the game while holding the Lady Blazers to just one hit during the stretch.

Auburn Montgomery rode their wave of momentum in extra innings, scoring four runs to take the lead in the eighth inning. VSU was unable to answer, handing the Lady Warhawks the game one victory.

Pitching played a vital role in the game. Richards threw 192 pitches in the game, while Auburn Montgomery pitchers threw a combined 133 pitches.

While game one came down to extra innings, game two was all but decided by the third inning, where the Lady Blazers scored 10 runs on their way to a run-rule victory.

Leading 3-2 heading into the third, the Lady Blazers’ bats caught fire, knocking nine hits in the inning alone. Additionally, three batters hit home runs during the inning to build what would be an insurmountable lead.

Senior redshirt senior, Baylee Everson, got the inning’s scoring started with a single up the middle, bringing home freshman pinch runner, Bobbi Poff. Macera was the next runner to score, reaching home on Hill’s single to second base.

Clegg then made it 8-2 with a three-run home run to center field, bringing home Everson and freshman pinch runner, Averi Martin, who was running for Hill.

Sophomore first basewoman, Aniston Gano, and senior shortstop, Nicole Pennington, then got on base with singles to left field. That set up sophomore designated player, Katie Proctor, who brought in three more runs with a home run to center field.

With junior catcher, Taylor Lewis, getting on base with a walk, Macera smacked a home run towards center field to round out the scoring in the inning.

While the Lady Warhawks did respond with four runs in the fourth inning to cut the lead down to 13-6, VSU closed out the game with a run in the fifth. Lewis sealed the game with a home run to give the Lady Blazers the win.

For the game, the Lady Blazers had 15 hits compared to just two hits for Auburn Montgomery. Hill and sophomore pitcher, Mia DeAngelis, were solid, throwing a combined six strikeouts.

With four seniors being honored before the game as part of Senior Day on Saturday, emotions were high in the pivotal game three. However, Auburn Montgomery scored just enough runs to take the series in extra innings.

VSU found themselves down early as the Lady Warhawks scored two runs in the top of the second inning.

Pennington got the Lady Blazers on the board in the bottom of the second with a homer to left field. VSU tied the game in the fifth inning as Hill hit a home run to center field.

While VSU had a chance to walk it off in the bottom of the seventh, their attempt was thwarted when Hill flied out to center field, leaving Macera stranded on second base.

The Lady Warhawks took the lead in the eighth inning when Chloe Derric homered to center field. Auburn Montgomery’s Allie Miller also reached home on a single from Margaret Mor.

While Clegg did score in the bottom of the eighth, it was not enough as Lewis grounded out to second base to seal the game.