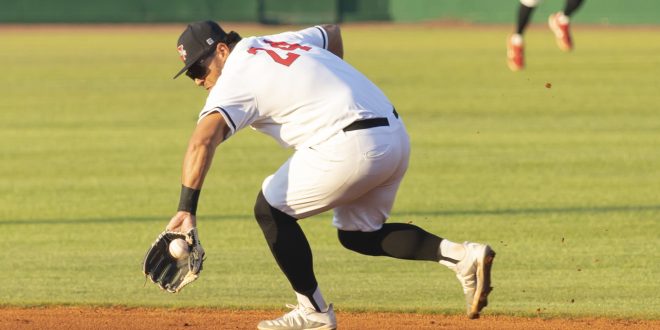 After dropping their last two weekend series against Gulf South Conference foes and having fallen out of the national rankings, the Valdosta State Blazers needed a series win to build some momentum for the stretch run.

Luckily, they found that against the Auburn Montgomery Warhawks, winning two of the three games to take the series.

Game 1 of the series was an absolute heartbreaker for the Blazers, as they wasted a superb outing by starting senior pitcher, Elijah Gill, due to the bullpen’s implosion in extra innings.

Going into the extra frame tied 3-3, the Blazers gave up four runs in that one extra inning, rendering a comeback too much to attain.

Gill was lights out in this game, throwing eight innings of three-run ball, with only two of those being charged as earned. On 132 pitches, Gill struck out eight, walked two, and surrendered eight hits, two of which were doubles and the rest singles.

The Blazers’ defense did him few favors, committing four errors in the game, one of which led to the tying run in the eighth inning.

In relief, junior Zach Henderson held the Warhawks down in the ninth, but dealt with the harsh realities of the ghost runner rule in extra innings, as a lead-off single by Caleb Beaver put runners on the corners.

Another error brought in the first run, and after sophomore Scott Curran replaced Henderson, he subsequently gave up another single, creating a two-run lead. Junior Mason Sharp and sophomore Nick Ferrara would combine with Curran to end the inning, as each pitcher recorded one out.

On the offensive side for the Blazers, they did all of their scoring in regulation in the third inning, where an RBI groundout by junior centerfielder, Bryson Gandy, and a two-run dinger from junior shortstop, Ryan Romano, put the Blazers up 3-2.

They wouldn’t score again until the bottom of the 10th, when junior first baseman, EJ Doskow, doubled home the Blazers’ own ghost runner Romano. Unfortunately, it was too little, too late, as the Blazers left 10 on base and wasted a gem of a start from Gill.

The Blazers clearly stewed all night on what happened the day before, as the Blazers took the opportunity to dispatch the Warhawks in the first game of Saturday’s doubleheader.

Eleven hits and a staggering seven walks led to the Blazers run-ruling the Warhawks in an eight-inning game that seemed set to go all nine until the Blazers put up five in the bottom of the eighth.

The Blazers took a quick 4-0 lead through two innings, as they capitalized on a throwing error from catcher Zach Feaster and a sacrifice foul out in the first. That was quickly followed by an RBI double by sophomore catcher, Jacob Harper, and an RBI ground out by freshman second baseman, Anthony Gutierrez.

Luke Turner, the Warhawks starter, limited the damage from there, going another three innings to give him five decent frames on the day.

It was the bullpen that did the Warhawks in, which gave up six runs in the subsequent three innings of play. Only one run was scored in the seventh off Michael Myers, the third relief pitcher used in the game.

The floodgates opened up in the eighth, with the main victim of the Blazers’ assault being Mason Elmore, the sixth reliever of the game from the WarHawks.

That was followed by a Romano walk, his third of the game, a Jose Crisostomo Bock (junior leftfielder) walk, and an RBI single from Doskow. After a Luke Ard (redshirt senior right fielder) groundout, senior designated hitter, Jisjar Clotida, sent the home crowd happy with a two-RBI single to end the game.

On the mound for the Blazers, sophomore J.J. Finn and junior Brandon Raiden combined for a seven-hit shutout.

Finn started off the game with five strong innings, and Raiden followed up three innings of his own. Together, they combined for one walk and six strikeouts, pitching with a lead the entire game.

In the second game of Saturday’s doubleheader, the Blazers and Warhawks went back to the seven-inning standard for doubleheaders this season, as this one went into extra innings as well, with a 1-1 tie creating a need for the extra frame.

A two-run eighth from the Warhawks was quickly negated by a three-run inning from the Blazers, ending a thrilling series on a high note.

Both pitchers were dialed in this game, with Auburn Montgomery’s Andrew Cronan and junior Kevin Tomas both pitching complete seven inning outings and stifling the opposition’s offense.

The Blazers were blanked after their one-run first, but the Warhawks waited until the top of the seventh to tie the game, as Joseph Hartsfield came up clutch with a two-out double.

The bullpen story was a different matter. Henderson entered in the top of eighth and was charged with two runs, both unearned, after throwing a single pitch.

A bunt single on that pitch, followed by a balk that scored ghost runner Clayton Phillips, led to Henderson being pulled for graduate Adrian Garrastazu. An error would lead to the second run scoring, and the Blazers found themselves with three outs left and a two-run deficit.

That was hardly a problem for Gandy, who blasted a 1-2 pitch into the seats for a two-run homer to tie the game. From there, Doskow did most of the work himself, singling in his at-bat before stealing second and taking third on a throwing error.

Bock walked the game off in the next at-bat with an RBI single, ending the game and the series with a Blazers victory.

The Blazers now sit at 25-11 on the season and 15-8 in GSC play, placing them second in the standings. With only one GSC series remaining, next weekend at West Florida, the Blazers will need a little help from the team ahead of them, Delta State, if they want to claim poll position for the postseason.

Before that weekend series, the Blazers travel to Saint Leo, Florida, to face off against the Saint Leo Lions on Tuesday.