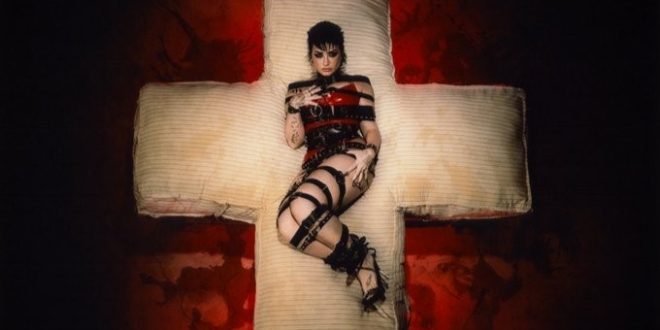 On August 19, 2022, Demi Lovato released their eighth album titled “Holy Fvck.” In this new 16-track album, the singer opened up about their struggle with rehab, addiction and mental illness.

Holy Fvck has a more hardcore pop-punk vibe as opposed to their previous albums, such as “Dancing With the Devil…The Art of Starting Over,” in 2021 or “Tell Me You Love Me,” in 2017.

The album opens with the track titled “Freak,” which features Yungblud. With lyrics like “Came from the trauma, stayed for the drama,” this song helps present to listeners what to expect from the rest of the album.

“Skin Of My Teeth,” the album’s first single and the second track on the album, does a superior job at grabbing listeners’ attention with the opening line, “Demi leaves rehab again,” in a fiery voice.

“Substance” is exactly as it sounds. It describes their constant struggle in life with wanting more and inevitably falling back on substances with lines like “Am I the only one looking for substance?/ Got high, It only left me lonely and loveless.”

“Eat Me” features Royal & the Serpent. This song is essentially Demi’s journey to self-discovery as a non-binary person. One of the most striking lyrics from this track being, “I know the girl that you adored/ She’s dead, it’s time to f***ing mourn.”

“Holy Fvck” references the story of Adam and Eve and differs from a lot of her other songs on this album that talk about pain and trauma. This song shows Demi enjoying and embracing their sexuality. Similar tracks to this one include “Heaven,” “City of Angels,” “Bones” and “Come Together,” which are all tracks of Demi exploring and being confident in their sexuality.

“29” is referencing a problematic relationship between a 17-year-old and a 29-year-old. With lines like “Now I know f***king better ‘cause I’m finally 29/ Funny just like you were at the time/ Thought it was a teenage dream, just a fantasy/ But was it yours or was it mine?”

“Happy Ending” is by far the saddest song on the album. This song details Demi’s strive for recovery and happiness while fighting away things that will deter these goals.

“Wasted” compares being wasted on substance to their love for another person with lyrics like “The highest high can’t hold a candle to/ Getting wasted on you.”

“Dead Friends” is a tribute to Demi’s friends who have passed away with lines like “I miss the time we can’t waste/ I miss the texts they can’t send/ I miss my dead friends.”

“Help Me,” featuring Dead Sara, is a fury-written song about people inserting their opinions for the sake of “trying to help you.” Lines, such as “Thank you for your useless information/ I’m gonna take your opinions/ Shove ‘em back in your face,” show Demi’s true anger and frustration for these people.

“Feed” shows how to be hopeful and positive with life after addiction with lyrics, such as “Still don’t know much but here’s what I learned/ My demons are on the hunt/ But my angels taught me how to run/ I got two wolves inside of me/ But I decide which one to feed.”

The last track of the album titled “4 Ever 4 Me” ties everything together with a love song and the hope of being happy again with the line, “Smitten and hopelessly/ Lost in this feeling/ Maybe I’m healing/ I couldn’t be scared if I tried.”

This new album from Demi Lovato takes listeners on a journey of recovery, self-discovery and hopefulness.

Previous Ashley Cinemas lights up the night one last time
Next Guide: Top 5 ways for College Freshman to Succeed