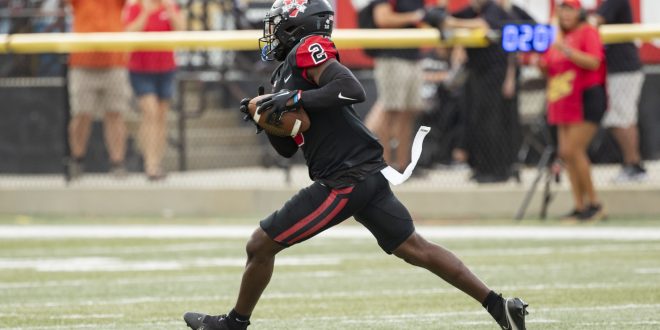 The Hawks gave the No. 13 Blazers all they could handle, jumping out to a 17-0 lead. However, it was the Blazers who walked out with the win, prevailing 34-30.

After both teams traded punts to open the game, Shorter found the end zone, putting together a ten-play, 90-yard drive capped by a 26-yard run by wide receiver Jaiden Dollard to go up 7-0.

Shorter added to their lead in the second quarter with a field goal as the Blazers’ offense struggled coming out the gate, gaining just 43 yards on their first five drives of the game.

Still, the Blazers’ special teams made a stand to keep things from getting out of hand, blocking a 34-yard field goal attempt to keep the game at 10-0.

However, the Blazers’ offensive woes continued as senior quarterback Ivory Durham tossed an interception. The interception set the Hawks up in the red zone, which they capitalized on, with Dollard punctuating the drive with a six-yard run to put the Hawks up 17-0.

The Blazers finally put together a drive late in the first half as Durham leaned heavily on graduate wide receiver B.K. Smith to get the Blazers into field goal range.

Still, the Blazers found themselves down 17-3 heading into halftime, marking the first time the Blazers have ever trailed Shorter after the first half.

However, the Blazers turned things around in a big way in the third quarter, outscoring the Hawks 21-6.

VSU got the ground game churning, feeding senior running back Seth McGill the ball throughout their opening drive of the third quarter. It was senior running back Jamar Thompkins, however, who capped the drive, plowing in for a one-yard touchdown run as the Blazers drew within seven.

The Blazers’ defense tightened up in the third quarter, forcing a quick three and out. The offense then took advantage of a short punt to tie the game.

Durham hit graduate wide receiver Davie Henderson for a 24-yard completion to put the Blazers in scoring position. Durham did the rest himself, scoring from 12 yards out.

Shorter answered right back with a touchdown of their own. Quarterback Aeneas Dennis jumpstarted the drive with a 31-yard pass to tight end Kyle Morlock.

The Hawks then leaned on their running game, retaking the lead on a one-yard run by Dennis. However, the Blazers’ special teams came up with their second blocked kick of the day to keep the score 23-17.

VSU went tit for tat, taking their first lead of the game. Durham hit senior wide receiver Travon Roberts in stride, who went for a 63-yard reception. Two plays later, Durham ran it in from six yards out for his second rushing touchdown of the afternoon.

The Blazers’ defense came away with a crucial turnover to start the fourth quarter as freshman defensive back Jordan Billups hauled in an interception and had a 65-yard return to put the offense in business. The Blazers wound up settling for a field goal as they went up 27-23.

However, Shorter refused to go away quietly, retaking the lead with just over ten minutes left in the game. Dennis connected with running back Devin Brown for a 58-yard touchdown pass as the Hawks went up 30-27.

McGill broke loose on the next drive, kicking the series off with a 48-yard burst. Four plays later, McGill rumbled in for a 13-yard score to give the Blazers a 34-30 lead with under eight minutes remaining.

In all, McGill accounted for 144 of the Blazers’ 176 rushing yards on just 12 carries, averaging 12 yards a carry.

The Hawks put together a lengthy drive, driving all the way down to the Blazers’ 12-yard line. However, the Blazers’ defense forced a turnover on downs to preserve the win and start off conference play 1-0.

Despite not throwing for a touchdown, Durham had a solid outing, going 17-30 for 230 yards and accounting for two rushing touchdowns.

Still, it was another shaky game for the defense. The Blazers gave up nearly 470 yards on defense, including 235 on the ground.