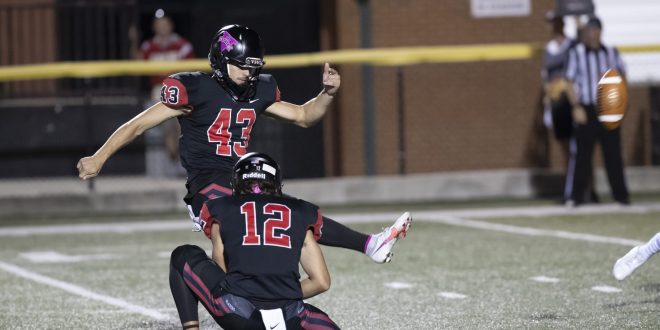 “We started really fast, [so] we had that positive going for us today,” Jackson said. “We just didn’t. We made some crucial mistakes that led to [West Alabama] getting points.”

For just the second time this season, the Blazers scored a touchdown on their opening possession. Senior quarterback Ivory Durham connected with freshman wide receiver Ted Hurst for a seven-yard touchdown pass.

After the defense forced a quick three-and-out, the Blazers’ special teams came up big. Freshman linebacker Akil Lampley, along with a host of Blazers, blocked the ensuing punt, with Lampley recovering the ball in the end zone for a touchdown.

However, all the momentum gained from the first two series of the game was seemingly erased as the Tigers quickly drove down the field. Running back Bry Webb capped off the drive with a six-yard run.

An energetic sideline then went dead silent as Durham tossed an interception in the red zone. The ball ricocheted off multiple players before being picked off by linebacker Trevon Stanford.

Jackson believes the interception not only changed the flow of the game but also caused the team to lose their early-game energy.

The game then turned into a battle of special teams as both teams were forced to settle for field goal attempts.

After a series of missed field goals and made field goals, VSU found themselves ahead 17-13 in the final minutes of the first half.

The Blazers started off the second half strong, quickly getting the Tigers off the field and scoring a touchdown; though, the way it unfolded was rather bizarre.

The Blazers started off the drive with a three-and-out. However, a high snap on the ensuing punt resulted in sophomore kicker Estin Thiele bolting for a 17-yard run, picking up the first down.

VSU then cashed in six plays later as Durham connected with senior wide receiver Victor Talley for a 39-yard touchdown pass to put the Blazers back out in front 24-20.

The game would only go downhill from there, however.

West Alabama answered the touchdown drive with one of their own, this time with running back Demetri Battle running it in from one yard out.

On the Blazers’ next drive, the offense were faced with a fourth and six from West Alabama’s 32-yardline.

Jackson elected to go for it, with the offense converting via a 16-yard pass to senior running back Seth McGill. However, a holding penalty wiped out the conversion and forced the Blazers to punt.

It’s been plays like that that have defined the season, according to Jackson.

“So you know, it’s kind of happened to us all year,” Jackson said. “We make a big play, and we have a self-inflicted wound that stops the drive.”

The penalty proved to be costly as West Alabama added to their lead with another touchdown to go up 34-24 early in the fourth quarter.

VSU’s next drive was even more damaging. The Blazers looked to trim the lead back to seven with a field goal, but the normally reliable Thiele missed from 38 yards out, his second missed field goal of the day.

Still, the Blazers’ defense and special teams kept them alive, forcing a fumble on a punt during the Tigers’ next drive.

The Blazers turned the short field into six as McGill weaved his way for a 14-yard touchdown run to make it 34-31.

Though the onside kick attempt was unsuccessful, the Blazers did get one last crack with under 30 seconds to play.

On the last play of the game, the Blazers resorted to the lateral game in hopes of a miracle. However, their luck ran out after getting the ball into West Alabama territory.

It was another long night for the Blazers’ defense. The run-oriented Tigers rushed for 327 yards and added on 176 more in the air.

The tests will only stiffen as the Blazers host the Mississippi College Choctaws (3-3, 2-1 GSC) on Oct. 15 at 3 p.m. for Homecoming. The Choctaws run the triple option offense and racked up over 500 rushing yards in their win against Shorter.

With the Blazers having yet to put together a complete performance, the struggles are being felt by the whole team.

“It feels like we’re struggling, and so we’ve got to figure out how to change that feeling,” Jackson said. “It doesn’t get any better for us. We’ve got to be able to stop the run, and we got an option team coming here next week. They’re on a winning streak, and they run the ball dang near every play.”