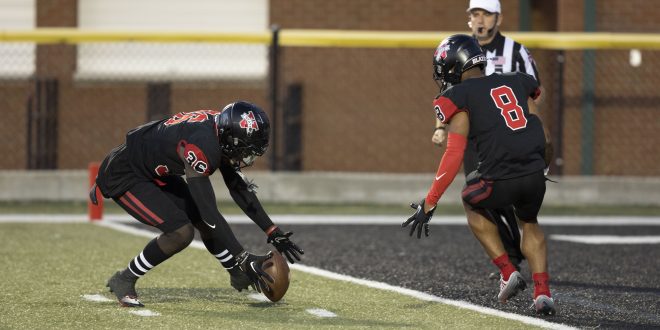 Redshirt freshman linebacker Akil Lampley recovers a blocked punt and returns it for a touchdown in the Blazers' 34-31 loss to West Alabama.

Blazers gear up for pivotal showdown against Choctaws on Homecoming

This year, Homecoming could help the Blazers (3-3, 1-2 GSC) right the ship as the Mississippi College Choctaws (3-3, 2-1 GSC) come to town Saturday at 3 p.m. Conversely, it could also send the Blazers’ season into a nosedive.

The Blazers enter Homecoming week on a two-game losing skid and are also under .500 in GSC play for the first time since 2017. The Blazers’ run defense was once again the Achilles’ heel as West Alabama rushed for 327 yards in the Blazers’ 34-31 loss last Saturday.

Conversely, the Choctaws have won two straight as they have their triple option offense firing on all cylinders. Last week, the Choctaws racked up over 500 yards on the ground in their 35-21win over Shorter.

Jackson says that the Choctaws’ triple option offense has made preparation tougher than usual.

“What they do offensively is so unique, and then even what they do defensively is so unique,” Jackson said. “We haven’t seen either one of those things this year, so we’ve had to kind of stay separate and get our game plans together separately. … Their offense is triple option, and we don’t do anything like that, nor do we see it except for this one time.”

However, Jackson also says that he has had a triple option package ready since the spring.

Additionally, Jackson believes that the Choctaws’ defense also has its own challenges despite there being some familiarity with what they run.

“Defensively, they put in the three high safeties, but we have done some of that here,” Jackson said. “So we’ve got a little bit of experience in that. Getting our offense accustomed to three safeties has been a different deal than what we normally do as well.”

While much of the game plan is different compared to other opponents, Jackson knows the plan is as simple as it gets.

Jackson is also aware of the Choctaws’ aggressive nature on offense, stating how they like to go for it on fourth down.

As for the Blazers, they’ll be looking to avoid falling into a lull. The Blazers got out to an early 14-0 lead last week, but an interception in the end zone changed the complexion of the game.

Jackson has stressed to his players the importance of not just starting fast but staying fast.

“What we’ve done is eliminated the mistakes and the non-executions,” Jackson said. “We had a chance to go up, and then we throw an interception, and then we give up a touchdown. So we got to eliminate that part of it and start fast, stay fast and then finish faster than that.”

Despite VSU’s struggles this season, the Blazers are very successful on Homecoming. The Blazers have gone 10-1 on Homecoming since 2010, with the lone loss coming to West Alabama in 2017.

The Blazers are also undefeated against Mississippi College (7-0) since the Choctaws rejoined the GSC in 2014 and have won 11 straight in the series.

While Jackson isn’t caught up on the past, he knows fans want to see good results.

Previous Editorial: VSU’s changes amongst this Homecoming season
Next SISTUHS Inc on a roll with 19 Chapters