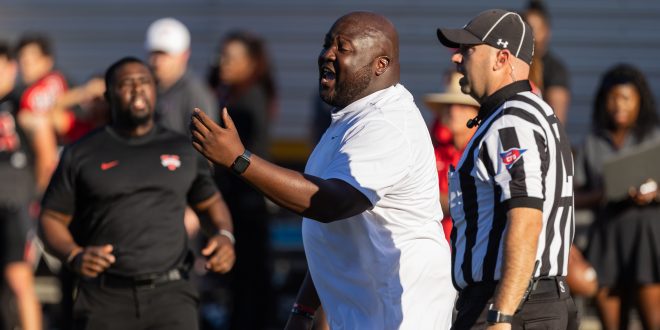 The Blazers have been through the ringer the past four weeks.

After starting off the season 3-1, the Blazers have been on a four-game slide as they have been unable to play a complete game.

Their most recent result, a 54-17 thrashing from No. 25 West Georgia in the Battle for the Peach Basket, is one that head coach Tremaine Jackson believes sums up the Blazers’ season.

“That’s kind of the story of our season,” Jackson said. “We’re in them, and then we don’t finish them or something bad happens. And then it seems like our team kind of goes in the tank a little bit.”

Additionally, Jackson believes the turning point for the Blazers against West Georgia was a failed fourth down conversion with two minutes left in the half.

“I thought the fourth down, not getting the fourth down, right before the half ended was big because we had some momentum,” Jackson said. “I wanted to try to carry that momentum into the offense, and we didn’t get it. And then we gave up a touchdown to make the gap 10. And then we never really recovered from that, and we came right out of the half and fumbled.”

Still, the Blazers (3-5, 1-4 Gulf South Conference) will be looking to finish the final stretch of the season on a high note, starting with a trip to Tigerville, South Carolina, to face the North Greenville Crusaders (3-5, 2-3 GSC).

With the Blazers are in the midst of its first four-game losing streak since before the new millennium, Jackson has been emphasizing the need to fight.

Jackson has seen the streak as a valuable lesson for the players and the staff.

“Sometimes when you win a whole lot and then you experience losing, you don’t know how to combat that,” Jackson said. “You don’t know how to overcome that adversity because you think when you walk in, you just win. It’s given our players a great not only football lesson, but off-the-field lesson. Things don’t always go your way because you show up. You have to stay up putting in work and I think our kids are doing that.”

While the Blazers have had their season-long woes, the Crusaders also have had several missed opportunities.

Close losses against top 25 teams in West Florida, Newberry College and West Georgia have defined their season. The three losses have come by a combined 13 points.

Jackson is not looking at the Crusaders solely by their record.

“On both sides, very well coached,” Jackson said. “They play with love, passion and enthusiasm. Even when they might be wrong, they really can make up for with how hard they’re playing. I’m looking at a team that’s not; they’re 3-5 by record, but they are no means 3-5 by what they look like on film. They could be 5-3 or 6-2. … And so, they’re a really good football team.”

Jackson thinks the environment in Tigerville will be electric as it’s Homecoming for the Crusaders.

“We look forward to it being a good atmosphere,” Jackson said. “Our players kind of thrive on that. Hopefully, we can come away with a victory.”