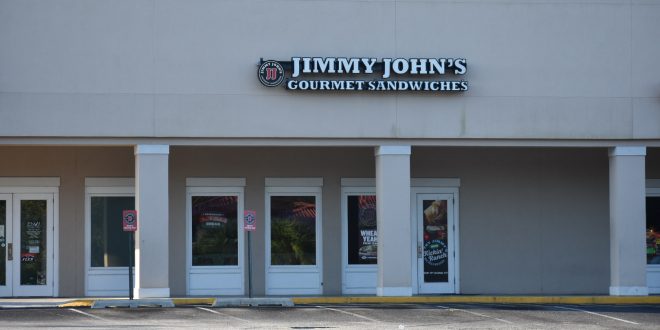 ‘This is a pattern’: Former employees stand against Jimmy John’s ‘toxic’ atmosphere

Musiteli Mubuso took to Facebook and Twitter on Sept. 30 on a mission to expose the most recent racially charged incident to come out of Valdosta: a Baytree Road Jimmy John’s employee posing as a Ku Klux Klan member for fun.

Conrad Schlegel, Jimmy John’s employee, committed the action during his Sept. 29 lunch work shift. This didn’t sit well with some of the employees there, but one in particular chose to do something about it—not publicly, however.

Mubuso, a friend of the employee, was chosen as the face in exposing the event. Now, the source, Nathalia Jaimes-Arias, has come forward to protest her former employer’s actions.

She said she chose to ignore their antics, but when Martin came up to her, she couldn’t help but notice their “joke.”

“Martin came up to me with the photo [of ‘Klansman Conrad’], said ‘Hey, check this out,’ and showed it to me thinking I would laugh,” she said. “He was cracking up, and I was so disgusted by what I’d seen—so angry I didn’t have words to say.”

Jaimes-Arias left soon after (it was the end of her shift), but returned later that day only to find something more enraging: The photo and a video of it, filmed by General Manager Diana Hartman, were posted in the establishment’s group chat.

She then took a picture of the group chat and sent it to the franchise’s owner, Brandi Shinkle, regaling her discrepancies, but Shinkle’s reaction was unexpected.

After telling Shinkle, Hartman messaged Jaimes-Arias stating, “I just wanted to apologize for the stuff that happened at the store today. I realize how it wasn’t okay, and it wasn’t meant to offend anyone or be taken literally. I won’t let any activity like that carry on and just know that I am sincerely sorry.”

Jaimes-Arias said she felt it wasn’t a sufficient apology.

“I’m just puzzled by the fact that she thought racism wouldn’t offend anyone,” she said.

Hartman also apologized in the franchise’s group chat, but for the fact the “joke” was entertained, Jaimes-Arias put in her two-week’s notice and sent the images to Mubuso to post on social media.

Jimmy John’s responded to Mubuso’s tweets in the name of Shinkle stating, “The incidents referenced in these tweets are horrible and hurtful. We have a zero-tolerance policy for this kind of behavior which is why we took disciplinary action against the people involved immediately upon learning of these incidents, and it’s why we are implementing diversity training for all of our employees immediately. I am also personally sorry as this does not at all reflect our values as a community or the business that I am running.”

Shinkle was offered the chance to comment but referred The Spectator to Jimmy John’s previous statement published on Twitter on Sept. 30.

So far, Hartman, Martin and Schlegel have been suspended. Carson, however, received no consequence since he wasn’t involved.

The Spectator attempted to reach out to Schlegel but received no response.

As of Oct. 5, Jimmy John’s released Shinkle’s statement on the state of the suspended individuals: “Following a thorough investigation of the events that took place at our store, we have terminated the employees involved, including the general manager. All staff are now undergoing diversity training which will become a regular part of our store operations going forward.  I apologize for this offensive behavior and will not tolerate it in my store.”

This isn’t the first instance of racially charged incidents occurring at the Baytree Road Jimmy John’s.

This past July, Employee Nicholas Olajos called his Co-Worker, Michael Nita, “nigger” and threatened to “shoot him like they did Trayvon Martin,” according to Jaimes-Arias.

Kelsey Townsend, a former employee who worked at Jimmy Johns during that time, confirmed this and said he didn’t experience it himself but sympathized with Nita.

“The impact that it had on me was one, seeing Nick still working there, and then two, confronting the owner about it and her mentioning that she didn’t mention it to HR and that she wasn’t going to fire him,” he said.

Jaimes-Arias said Shinkle was dealing with the death of an employee, regarding why she didn’t handle the situation sooner. Townsend said that doesn’t excuse negligence towards an incident like this.

“I guarantee you if anything goes on in her business, she would’ve dropped everything,” he said. “This was one of the situations in which she just didn’t feel like it held the gravity to do anything about.”

Olajos was only just fired two weeks ago, but Jaimes-Arias said her work experience with him had been uncomfortable ever since.

“He was never going to go through with it, but it was the fact that he could say something like that and be ok with himself,” she said. “It was disgusting to me.”

Townsend said he believes the franchise’s atmosphere to be “toxic,” saying that these two issues aren’t just a problem with employees but management as well.

“This is a pattern,” he said. “There was literally a group message in which someone randomly put ‘I hate Mexicans.’ It’s fine if the workers do that and then Brandi does something about it, but the problem is the employees are acting up and so is the owner.”

Though nothing is set in stone, Townsend is gathering people around VSU who are “disgusted by the situation” to form a boycott and protest Jimmy John’s. This won’t be their only goal, though.

“We’re trying to spread love [but] we’ve just seen hate, we haven’t seen people who are remorseful—sorry,” he said. “We’ve seen people who have tried to cover their own butts, and we have seen people with even more lack of respect than before. I don’t want this to become a situation in which we look at every single Jimmy Johns employee and say they’re bad. This isn’t an ‘us against them situation.’ Anybody who tolerates this behavior is a part of the problem.”

This story was updated at 9:17 p.m. by Bryce Ethridge.

This story is subject to updates as they occur.

After former dean Keith Walters was arrested for the involvement of a child sex sting ...