Home / Sports / Column: Who will be the next great NBA star? 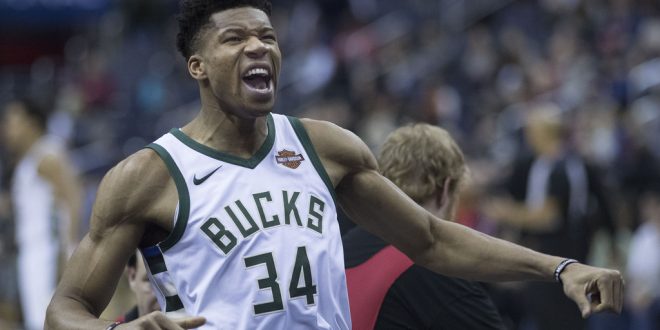 Giannis Antetokounmpo (34) is pictured after a thunderous dunk during a home game against the Miami Heat.

Column: Who will be the next great NBA star?

LeBron James, the best player to ever grace the hardwood, is heading into the final stretch of his career as he suits up for his 15th season. It’s time that we try to find who will be the next greatest player in the league after he departs from the game. These future prospects have the most potential to one day hold that mantle.

To find such a player worthy of the title of G.O.A.T. we have to look at the history of the NBA, observe the greatest of the past eras and identify the types of players they were.

In the 80s “Magic” Johnson and Larry Bird were two-way wings that dominated on both sides of the floor. Michael Jordan in the 90s was head and shoulders above the competition.

The same came can be said in the current era with LeBron James: his prowess on both ends gives him the nod as well.

Now, we have to observe very young players in the league currently, and also prospects that are still in college. Anyone over the age of 24 shouldn’t qualify. They would have played most of their careers in the era of King James; players like Kevin Durant, Stephen Curry, and James Harden are excluded.

Now that we’ve established the requirements to be able to mold into this caliber of player, there are only three players that have potential to fall into that category in the current NBA: Giannis Antetokounmpo, Ben Simmons and Devin Booker are their names, and they’ve all accomplished great feats for their very young ages.

Giannis’s development has come a long way from being drafted 15th back in 2013 to being an unstoppable force driving to the rim with his 6’11 frame.

Ben Simmons was dubbed the “Fresh Prince” by LeBron James himself, won rookie of the year honors last season and took his team to the playoffs after having been the number one overall pick the season before.

And Devin Booker put the NBA on notice, dropping 70 points on a good Boston Celtics team in his second season at the age of 20!

All three are tremendous players in their own right, but we’ve seen them and they seem like they are missing something.

But there is one prospect that has the scouts raving right now. He’s coming out of Duke University and his name is R.J. Barrett.

He’s gotten high praise from scouts, being named the most decorated prospect since LeBron. He has all the tools in his game to be up next at only 18.

Barrett has the capabilities of a two-way player at the next level, along with his willingness to pass fitting right into the new NBA style of play. Wing skills, spotting up and slashing to the rim are strong emphasizes in his game. It is all going to come down to capitalizing on his gifts and wanting to be great bad enough.

He has the potential and the best bet for the title of G.O.A.T. in a few years’ time.

Previous Preview: Blazers Golf travel to Puerto Rico
Next The Room of Arms