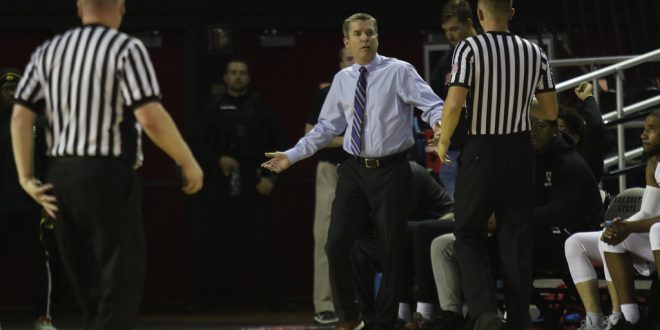 West Georgia jumped VSU in the Gulf South Conference standings, moving into the third spot. The Blazers move down to fourth.

‘We suck right now’: Blazers lose in frustration to Wolves

In less than a week, the Blazers have endured some growing pains.

On Thursday, the Blazers (13-4) suffered their second straight loss as the West Georgia Wolves (11-5) held on to an 87-86 win at the P.E. Complex. This is the first time the Blazers have lost back to back games this season.

“It was a really great atmosphere tonight, but ultimately, we suck right now,” Justice, who scored 15 points during the game, said. “For me, personally, I sucked tonight. Our team was not good tonight. We have to find a way to win.”

The Blazers’ formula for beating teams is to win from the perimeter and get on fast breaks for easy baskets. Those two methods worked to a certain degree.

For the first half, the Blazers were defended heavily from beyond the arc. They were forced to take contested three-pointers, making four of seven.

On fast breaks, they managed to get out and running, but they were short lived. Turnovers plagued the Blazers as outlet passes were intercepted by the Wolves’ defense.

The Wolves had 10 steals that night.

The Blazers appeared to look sluggish coming out of intermission. Head Coach Mike Helfer believes that the Wolves came out with “more toughness and a sense of urgency.”

“What really got us was that they were tougher than we were,” Helfer said. “They were more aggressive, moved quicker to the ball until we felt threatened because we were down 17 or 18 points. We just tried to make plays that will help us catch up, and that is completely the wrong way to play basketball.”

The wrong way produced 17 turnovers for VSU, leading to 22 points for the Wolves.

In the second half, the Blazers were able to pick up loose pieces of their faulty first half play. They got to the foul line more and converted at a high rate (80 percent).

Guard Winston Morgan drained back to back threes in the second half that ultimately gave the Blazers a one point lead. The lead lasted 36 seconds before the Wolves put together a string of free throws, placing the game out of reach.

It should be noted that the No. 1 scorer in the Gulf South Conference, Marquill Smith, gave VSU players a run for their money. Smith finished the night with a game-high 32 points, adding seven rebounds and six assists.

Justice, being No. 2 in scoring, didn’t shy away from the matchup, even with his dull performance.

“I honestly do not care about scoring,” Justice said. “He can shoot as much as he wants. He can average 30 [points] and I can average 10 [points], I will still feel like I have given my team the best chance to win.”

He did so by sinking back-to-back three-pointers in the waning moments of the game. Justice finished with 15 points in the game.

“He is the best player in the GSC,” Helfer said. “He is an all-around player. I love Beau Justice to death, but Marquill does it all. He does so much for West Georgia, just as Beau does for us.”

Justice did all he could. His teammates picked up the load as Morgan led the Blazers in scoring 20 points. Forward Bryce Smith produced the only double-double of the night – 13 points and 11 rebounds.

The Blazers are facing adversity in the middle of the season. They still have all the pieces they need to be successful in the GSC.

“Our losses have come from within, not from without,” Justice said.