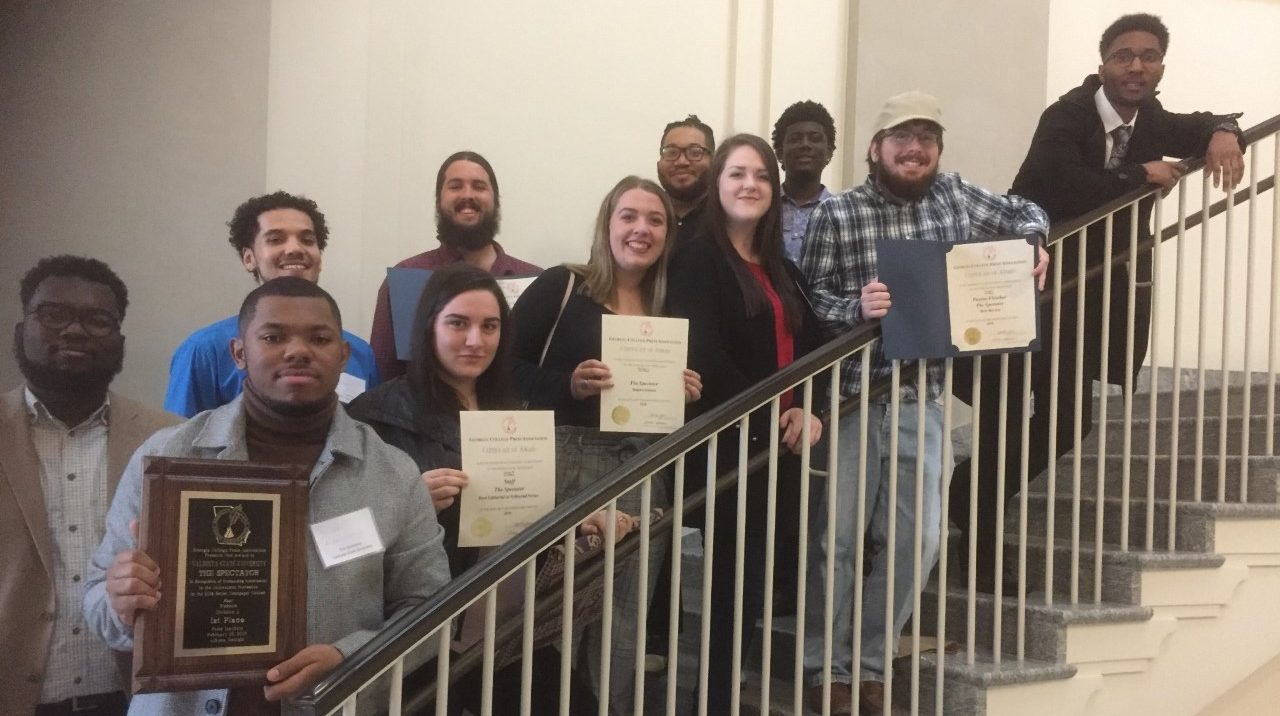 The Spectator staff stands together for a photo op with their awards.

The Spectator staff made their presence felt at the Georgia College Press Association Press Institute on Feb. 15, 2019. It’s evident in the awards they brought home and the board positions they filled.

The Spectator’s staff netted three staff awards and two individual awards. Most notably, The Spectator was named as first place winners for the category “Best Website.”

Editor-in-Chief Juston Lewis said he understands just how important this victory is for the organization and his staff.

“It’s great,” Lewis said. “This award means we’re doing our jobs. To be a digital publication and to top schools such as UGA, Georgia Tech, Georgia Southern and Georgia State means we are excelling.”

For Lewis, the work isn’t over just because there’s hardware to show off though.

“We will continue to provide the Valdosta community with an unfiltered, uncensored voice,” he said.

Fletcher, in his first semester as a Spectator editorial staff member, won first place for “Best Review.” The award was given for his review of the documentary “Suicide: The Ripple Effect,” titled “Waves that Don’t Stop at the Shore.”

Fletcher, whose journalism career is still young, said he understood the meaning of such an award, even if his humility concealed the fact.

“Winning the first time I went to GCPA, I guess just cements the fact that I’m kinda good at this,” Fletcher said.

Davison won first place for “Best Column,” for his opinions on the passing of US Senator John McCain and the nation’s political climate at the time of his death, titled “Opinion: On John McCain’s Legacy and America’s Future.”

The Spectator’s staff built on their momentum during the awards ceremony, where positions for GCPA’s elected board members were announced.

Four Spectator staff members were elected to positions, allowing the college newspaper and Valdosta State’s student journalists to be well-represented throughout the next year.

Robinson and Lewis constituted an unprecedented Spectator-sweep of the GCPA board’s highest positions.

The event was held at the University of Georgia’s Russell Special Collections Library in Athens.

Previous Cinnaholic comes to Valdosta
Next VSU Discovers the Past, Present and Future of Black Nurses