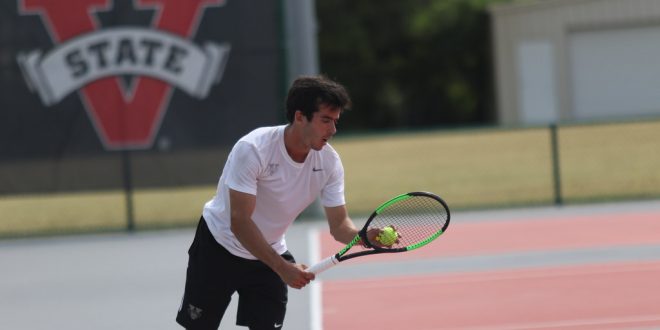 VSU men's tennis ranks No. 1 in the Gulf South Conference standings at 9-3.

Blazers fight back to defeat Auburn-Montgomery 4-3

The wheels continue to turn for VSU men’s tennis.

After a 4-3 comeback win at No. 30 Auburn Montgomery on April 11, the Blazers (9-3) pushed their win streak to nine matches.

The Blazers are 7-0 in Gulf South Conference play with three matches left. VSU holds a one-game lead over the West Florida Argonauts (6-1).

AUM won at No. 2 to clinch the point as Eban Straker-Meads and Santiago Veglia defeated VSU senior Jordi Mas and sophomore Florian Simbozel 6-4.

Cizek and senior Xavier Pineda were tied 6-6 in a tiebreaker at the No. 3 doubles.

Cizek started slow, dropping the first set 6-2 to Giovanni Bellio at No. 6. Cizek redeemed himself and won the second set 6-4. In the final set, Cizek took a 2-1 lead and a 6-1 win for the Blazers.

VSU will travel to Pensacola, Florida, to face Mississippi College on April 19 at 4 p.m. ET.

Following the matchup, VSU will play in two matches on April 20 versus Delta State at 1 p.m. ET and Christian Brothers at 4 p.m. ET.

The Gulf South Conference Tournament begins May 2 in Montgomery, Alabama.