Home / Entertainment / From fast fashion to flops: The fall of Forever 21. 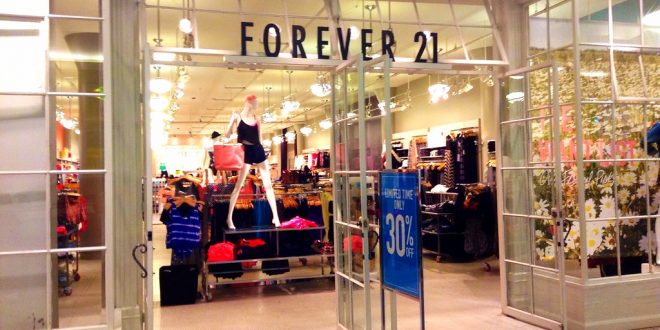 At least the clearance sale will be good.

From fast fashion to flops: The fall of Forever 21.

The popular clothing store Forever 21 has recently been in some hot water concerning the future of their company. It seems as if the clothing store has simply not been able to catch a break for a while now. From financial struggles to celebrity feuds, this company has truly been the victims of extremely bad luck.

The series of unfortunate events for the store began when word got out that they are potentially filing for bankruptcy. According to USA Today, Forever 21 has a short amount of time to restructure their financial status before they run out of chances to continue their business. They have recently hired a team of advisers that they are relying on to ultimately save the future of their stores. “Filing for chapter 11 bankruptcy protection often involves some store closures as stores look to break leases,” USA today said.

However, most of their locations are in shopping malls that are quickly fading away and have very few stores in them already.

The game plan for Forever 21 includes creating completely reorganized and smaller companies that can start anew. That way there are fewer stores to manage and eventually less money to be overspent or used in the wrong way. However, with their last locations being very unpopular, the future of Forever 21 seems bleak.

Money troubles have not been the only plague to hit the clothing store. A massive outbreak of angry customers came along when the store sent Atkins diet bars with their online orders. For a plus sized customer, receiving a dieting bar from your favorite clothing store can come off as very offensive and insensitive. While the store claims that the diet bars came with other orders that were not just plus-sized, social media took to the issue and labeled it as fat-shaming.

One customer on Twitter said, “It is so dangerous to body shame and suggest that someone eat less or go on a diet, you don’t know their history with food. As someone recovering from an ED (eating disorder), this would’ve set me back so far.”

This comment alone shows a different side to the seemingly harmless mistake.

According to the New York Post, Forever 21 released the following statement about their Atkins bar mistake: “Today’s Atkins is focused on a lifestyle nutritional approach where everyone can benefit from overall health and wellbeing. The intention of sampling Atkins products is to share snacks that taste great with optimal nutritional benefit.” In other words, the company is standing by the idea of healthy-living, not simply dieting. That unfortunately did not alter the angry comments coming from customers.

If the first two problems were not detrimental enough to the company’s lifespan, the controversy concerning pop singer Ariana Grande and Forever 21 is sure to bring more negative attention to their name.

According to TMZ, Grande declined an endorsement offer from Forever 21 in an attempt to save their company’s name. However, the brand did not offer up enough money to use her name and/or likeness. In a desperate attempt to save their brand, the store went along and used outfits and models far too similar to Grande’s aesthetic…without her permission. TMZ said, “Grande claims the company stole imagery from her album to create a false perception Ariana was backing the Forever 21 brand.” Grande claims that the clothing store used the success from her “Thank U, Next” album to endorse their brand and make sales. She is also suing for $10 million in damages, which obviously decreases any chances of the store renewing their good name.