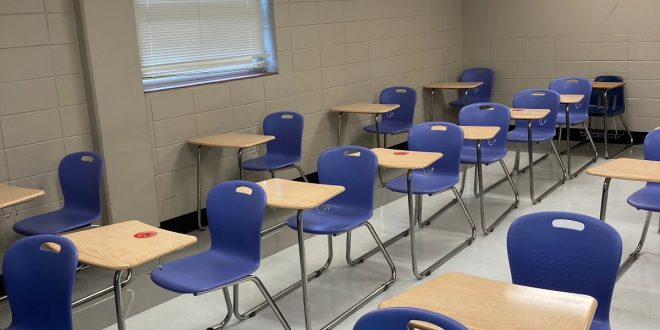 President Richard Carvajal was the guest speaker and addressed his wishes to increase the number of face-to-face classes on campus on Nov. 2 when the Student Government Association held their last face-to-face general meeting of the semester.

Melissa Wolfe, SGA president, delivered the state of the SGA, in which she commended the student government for their efforts and accomplishments in adapting to COVID-19 with new safety guidelines around campus, a record-breaking freshman enrollment, improved student parking, a week-long move-in process that several senators volunteered to help with, hosting Congressman Buddy Carter and the creation of the Diversity and Inclusion Committee.

“The legacy of the 2020-21 SGA will be our dedication to diversity, inclusion and student health and wellness,” she said.

According to Wolfe, the SGA welcomed 18 new first-year senators and two graduate senators this year.

In her closing remarks, Wolfe announced that the SGA Executive Team will be hosting an end-of-the-year holiday social for the senate. In Spring 2021, the SGA will meet in person bi-weekly.

Next, Dr. Carvajal addressed the senate.

He thanked the senate for moving forward and staying strong during the unprecedented times COVID-19 has presented.

Dr. Carvajal expressed wishes to increase student engagement during spring 2021 due to rumors of students planning to stay home since VSU isn’t offering many face-to-face classes/events.

“We have taken steps to create an environment that allows face-to-face instruction,” he said.

Dr. Carvajal assured the senate that the schedule in the spring will be more face-to-face than fall 2020. He and his team are committed to creating a schedule with plenty of face-to-face activities besides classes.

VSU is currently figuring out precautions for the return of fall sports in the spring of 2021.

Dr. Carvajal encouraged the senate to participate in the 2020 election.

“I think you as student leaders are more capable of that than me,” Dr. Carvajal said. “Talk to each other. We have public safety officials ready if we need them, but I hope they don’t get a single call.”

Dr. Carvajal also announced the launch of the Diversity and Inclusion Task Force. The task force will have recommended actions reported back to Dr. Carvajal by the end of the spring 2021 semester after students have had the opportunity to give their suggestions.

Following the Q&A period between the senate and Dr. Carvajal, Vice President Maisy Mustic recognized senators for their achievements this semester.

Senator Vosburgh, Senator Wilkinson, Senator Brown, Director Clinton and Senator Meeker were recognized for their contribution and dedication to SGA.

The meeting consisted of members discussing what direction they want this committee to go.

The committee requested that the senate address their issues and concerns targeted toward diversity and inclusion to President Pro Tempore Smith or Director Laura Northup.

The SGA general meeting was adjourned at 8:17 p.m.

Previous People Poll: What’s your favorite part about Thanksgiving?
Next More history to be made as The 2020 Masters plays out in Augusta