Home / News / A.C.T.I.O.N. pushes for the renaming of Forrest Street 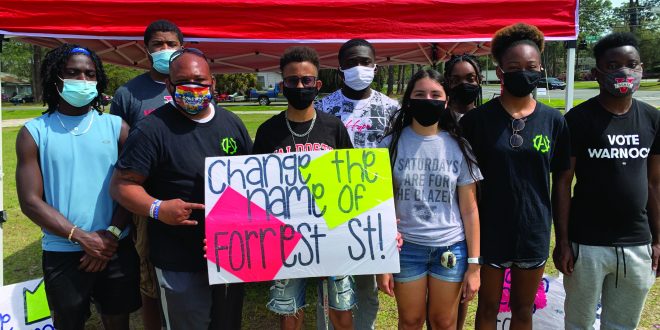 A.C.T.I.O.N. pushes for the renaming of Forrest Street

A.C.T.I.O.N, a sociology and anthropology club at VSU, is currently petitioning for a change of “Forrest Street” to “Barack Obama Boulevard.”

A.C.T.I.O.N stands for A Chance To Initiate Opportunities Now and is organized by David Davis, a graduate student and passionate activist. The club is consistently pushing for social change in Valdosta.

Forrest Street is named after Nathan Bedford Forrest, who was a Confederate Army General during the Civil War and the first Grand Wizard of the Ku Klux Klan. Nathan Bedford Forrest maintains high prestige within white supremacist groups in the United States, and as a result of Valdosta’s history, he was idolized.

“There are a lot of streets down here that are named after different people from the Confederate Army, Ku Klux Klan and slave owners,” Kiki Day, vice president for A.C.T.I.O.N, said. “We [A.C.T.I.O.N], thought Forrest Street would be a good place to start down here and we are not finished after this! We wanted to do this street because, (1) it is named after the Grand Wizard of the Ku Klux Klan, (2) we do not want people who live in the community to be oppressed anymore.”
Davis said that Reverend Floyd Rose, a civil rights leader and reverend at Serenity Church in Valdosta, wanted the street name to be named after Barack Obama and the organization wants to honor his request.

“We want to push back and Barack Obama Boulevard would not only be a slap in the face to racist people, but it would also be a testament to black people getting their stride in a community like this [Lowndes],” Day said.

Day said that VSU can contribute to making changes in Lowndes through acts of community service like this one.

“Personally, it is important for me to make a change wherever I go and I think that is very important for everyone,” Day said. “Especially for college students . …we have so much drive and we are doing the thing! Get involved, help out in any way you can, show up to Saturdays like this, spread the word, and try to do the best that you can. It is very important to connect to the community around us and I think we can do that through community service and giving back in any way we can.”

Currently, there is an ongoing effort in groups of Valdosta to have the street name changed by signing petitions for the Mayor to review.

A.C.T.I.O.N is now planning for another upcoming event in April.

“We are having a march for Latinos,” Day said. “A policing while black event, we are bringing out police officers – men and women – to tell what it is like being a black officer. We are also doing a vigil for COVID-19 and the healthcare workers that have been on the frontlines.”

A.C.T.I.O.N continues to encourage students to be a part of the program and help influence change.

“We definitely want all the students to be a part of that, if anyone wants to perform or anything, they can reach out to me or Kiki Day,” said Davis. “Feel free to help and build this program!”