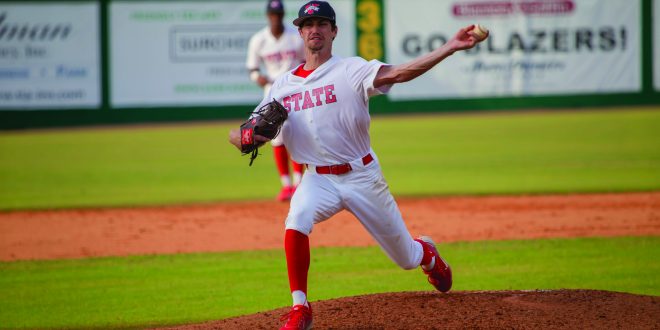 The Blazer baseball team is playing at home this weekend against West Florida for a mid-season matchup and chance to further their winning streak.

The Blazers are coming off a revenge victory Tuesday at home against Georgia Northwestern. The previous matchup ended in a 10-3 loss, but the Blazers took the rematch 3-2 thanks to strong pitching out of the bullpen.

“A lot is determined by what happens in the series against West Florida,” head coach Greg Guilliams said. “They’re ahead of us [by 2 games] so we have to win that series.”

If the Blazers win all three games, they may overtake West Florida in the standings and inch closer to first place Lee University (16-1 conference).

West Florida holds the lowest ERA in the GSC allowing only 3.06 earned runs a game as a team. They also possess a deep bullpen with multiple quality arms that are responsible for eight saves on the season, second most in the conference.

The pitching rotation is led by ace Evan Floyd who has been one of the best pitchers in the GSC this season for West Florida. He ranks in the top three in the conference in ERA (1.47), opponent batting average (.170), and strikeouts (48). The redshirt junior has also thrown two complete games this season including a shutout over seven innings of action against Mississippi College.

The depth of the rotation is attested by how this team has allowed more than three runs only once in the last eleven games—a streak of great pitching that the Blazers intend to end.

VSU’s offense is plenty strong in its own right, however. They are in the top five in the GSC in almost every major offensive statistic, including leading the league in doubles (46) and on-base percentage (.390).

The offense has been led in large part by designated hitter David Maberry, who will have to show up big time against Floyd and West Florida.
According to coach Guilliams, Maberry is probably the best hitter in the league.

“He hits for power, he hits for average, and teams pitch around him because he can just really hit the ball,” Coach Guilliams said.

While West Florida doesn’t have an offensive star like Maberry, they do have a deep lineup of guys who combine to give West Florida the top spot in the conference for team batting average at .303. West Florida is also fresh off a season high 14 runs last week before facing VSU.

But on the mound is where West Florida wins games. They’re one of, if not the best pitching team in the GSC. The Blazers, however, are one of the best hitting teams in the GSC. This heavy-weight matchup between two of the best units in the GSC also carries major implications in the standings.

It will be especially tough for the Blazers to get hits in game one against Evan Floyd, who may represent the toughest challenge for VSU batters since Shorter’s Taylor Boisclair blanked the Blazers back in February.

Even though West Florida’s starting rotation and bullpen are both deep, VSU can hit well enough to take at least two games and win the series. If the bats are really big for the Blazers, I can see a sweep potentially.

But make no mistake, West Florida has a good squad on offense and defense, and they present a real challenge.

Thankfully, VSU plays the series with home field advantage. Opening pitch is Friday, March 26 at 5 p.m. and games two and three will be on Saturday at 1 p.m. and 4 p.m. at Billy Grant Field in Valdosta.

Previous Advisors’ recommendations for smooth registration
Next A.C.T.I.O.N. pushes for the renaming of Forrest Street