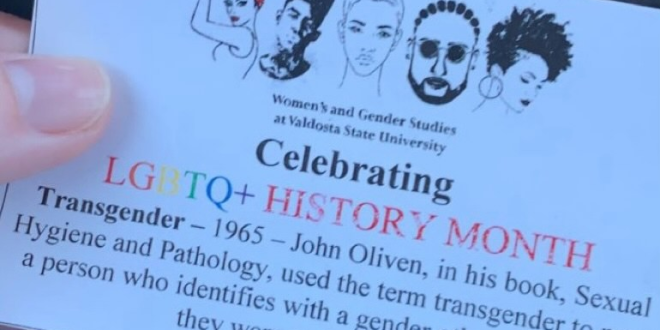 On Oct. 26th in front of Odum Library, the Women’s and Gender Studies department celebrated LGBTQ+ history month with the “Taste of History” event.

Charity Lumpkin, an administrative assistant, and two others stood in front of the library passing out small cards with LGBTQ+ facts on them and candy attached to the back. Facts included the definition of some LGBTQ+ words such as transgender, bisexual and asexual.

“We’re passing out some candy treats attached to those little papers just to give people a little notice as to what LGBTQ is and what all is going on in their community,” Lumpkin said.

LGBTQ+ history month spans the month of October and was first recognized in 1994. It was started by a Missouri high school teacher, Rodney Wilson, who believed that gay and lesbian history should be taught.

The LGBTQ+ community is the only community worldwide that is not taught its history at home, in public schools or in religious institutions. The “Taste of History” event provided that learning opportunity.

“It’s important to host this event because a lot of people closet their sexuality, mainly for society purposes because they feel like they would be judged or looked at differently when everyone is the same granted who they are interested in,” Carlee Hammond, a freshman undecided major, said. “So, I feel like it is a good opportunity for people to learn more.”

Others walking by saw the event and chose to take part.

“I totally agree with what Carlee said,” Sky Franklin, an engineering technology major, said. “I came to support.”

The event lasted from noon to 2 p.m. and attracted many passerby’s with large signs and the buckets full of candy.