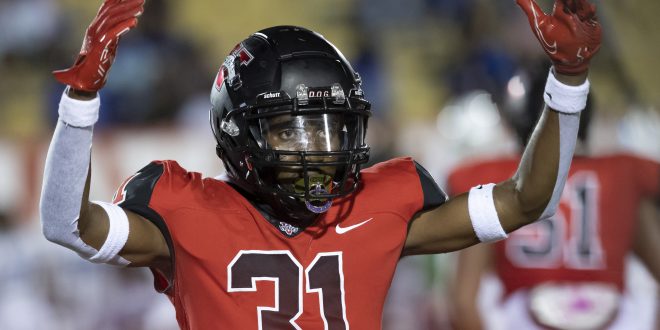 In college football, it is rare for two teams to face each other twice in a season, let alone twice in the regular season.

When the Blazers (4-6, 2-5 Gulf South Conference) take on the Shorter Hawks (3-7, 1-6 GSC) on Saturday, however, there will be an extra level of familiarity.

The game, which is part of the GSC Playoff Preview, pits two teams that have drastically changed since they met in Rome, Georgia, nearly two months ago.

“Yeah, it’s kind of like, I know what the guys in the NFL when they get into divisional play, what they feel like,” head coach Tremaine Jackson said. “It’s, they are a lot different. [If] you go back and you watch the last game we played them in at the end of September, we’re so much different as well.”

The Blazers wound up winning that matchup 34-30 but trailed by as much as 17 points.

According to the GSC, the GSC Playoff Preview was put in place to help GSC teams get an extra in-region contest prior to the NCAA Division II Playoffs following difficulties securing in-region non-conference matchups.

Though both the Blazers and the Hawks have been eliminated from playoff contention, it doesn’t change the importance of this game in Jackson’s mind.

“It’s important to get a win every time when you’re in Valdosta, Georgia, no matter what time of the year it is,” Jackson said. “What a win would do for us this week is it will propel us into recruiting. There’re one positive about not being able to go to the playoffs, if you can find one. Now, we want to be able to play as long as we can play, but the positive is we’re able to get out on the road and go recruiting.”

Jackson also believes that being able to get a head start on recruiting at a program such as VSU could pay dividends in the long run, despite a down year.

“I think with the way recruiting is, when you step out on the road with a win in your last game and a program with our history and tradition that’s had a down year, it’s not so hard to talk back people into, ‘Hey, we had a down year, but that’s why we’re out her getting you so we’ll never have that down year again,’” Jackson said. “Our recruiting pitch is already there.”

This game is also the senior game. Though the Blazers have a lot of seniors on the team, perhaps none have been more impactful than quarterback Ivory Durham and running backs Seth McGill and Jamar Thompkins.

“Those guys [the seniors], they will leave here, hopefully 37-9,” Jackson said. “There’s a lot of people that wish they’ve only lost nine games in a career, and so they leave certainly a great legacy. You’re talking about three guys that had a backfield of all 1,000-yard rushers a year ago. That had never been done before in the history of our game, and so those three guys have a lot to be proud of.”

While Jackson is happy he’s had the opportunity to coach Thompkins, he also doesn’t want him to focus solely on breaking the record.

“The coach in me says Jamar should have broken this record a long time ago, but he fumbled the football, and when you fumble the football, you just can’t stay in the game,” Jackson said. “Hopefully he goes out and he does what he’s supposed to do to help the Blazers win, and in winning, if he can accomplish that record, that would be awesome.”

As for the game itself, Jackson has had one message for his team: play fast.

“I told our team I’m tired of starting slow,” Jackson said. “I’m tired of only playing 30 minutes of the way that I know we can play. We’ve got to start fast, we’ve got to stay fast and we’ve got to finish faster than that, especially on senior night, where we’ve got so many seniors that have played a lot of football for Valdosta State.”