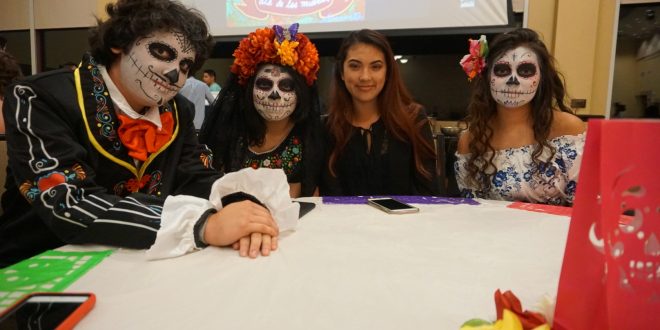 Student Diversty and Inclusion presented a Dia De Los Muertos celebration, also known as Day of the Dead, on Nov. 1 to give recognition to Latino culture on campus.

Dia De Los Muertos is a holiday observed in Mexico and other regions with large Hispanic populations. It is a holiday meant form people to pray and remember beloved friends and family that have passed away. The holiday is three days long, beginning on Oct. 31 and ending Nov. 2.

“I don’t know much about Day of the Dead, but I do know that it’s not so much a fun holiday, like Halloween, it’s serious and it’s about respect,” Kateria Eichler, a sophomore and president of the DeutschKlub, said.

VSU’s Dia De Los Muertos celebration was established as a way for different cultural groups to get together and share. Groups can show what life is like in their cultures and raise awareness for each other.

“It is important to celebrate culture because in America is often black and white, but there are more cultures than that,” Kandice Smith, senior and Sigma Lambda Gamma member, said.

The event was held in the Student Union ballrooms on campus from 6 p.m. to 8 p.m. Students could paint and do crafts at different tables and were offered authentic Mexican food. They served beef or chicken enchiladas, chips and salsa, guacamole, rice, and beans.

The Spanish Club extended their invitation to all students at VSU. They particularly welcomed other cultural clubs to join in and share their own culture. There were six other clubs in attendance: The Spanish Club, Sigma Lambda Gamma National Sorority Incorporation, the Latin American Students Association, Sigma Lambda Beta, the Deutsch Klub (German Club), and the Caribbean Student Association (Caribsa). Students from the College Assistance Migrant Program also attended and co-sponsored the event.

“We’re here because we have Latin roots, and Dia De Los Muertos is celebrated by lots of Spanish countries,” Lynda Jimenez, senior and member of Sigma Lambda Gamma, said. “This is important to me because it’s an event where we get to talk about culture and at VSU we don’t have that.”

Some students came out to broaden their horizons and see and learn about how another culture celebrates their holidays.

“I wanted to see and learn what the celebration (Dia De Los Muertos) was about,” Jayla Motley-Brown, a freshman biology major, said.